BJJ is one of the few martial arts where there isn’t a clear answer on what is worn for training in it. Some schools strictly practice only in the gi, some treat it more as wrestling and train only in shorts, t-shirts or compression gear. Some train both and may slide more often toward one side or the other, and it really boils down to the instructor and the focus of the school. If it’s an MMA gym and BJJ is being taught as only a part of the overall program then it’s more likely to be no-gi. If it’s a pure BJJ school with self-defense as part of the curriculum then the gi is more likely to be the norm. I believe that no-gi and gi are both essential as training tools no matter what your focus, and here’s why:

No-gi is great for developing your attacks and control from top positions, especially when both competitors start to get sweaty because there’s no friction to help you keep your grips and your weight on someone. If you don’t set everything up just right, it’s much easier for someone to explode out of something and escape. If someone is strong, fast or flexible it will be more of an advantage in no-gi, and since it’s easier to escape you’re also likely to spend more time scrambling which means you’ll get in great shape! Even if you like to compete in the gi, it’s good to train no-gi because all gis are different and you don’t want to base your whole game around certain grips that may or may not be easy to get depending on the fit and material of the opponent’s gi. This also makes no-gi training great for self-defense since you never know what kind of clothing an attacker might be wearing. 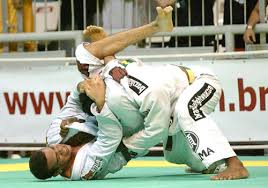 The gi is an excellent tool for developing the fundamentals of BJJ, especially the guard and escapes. The added friction and grips of a gi make physical attributes less effective so you must be technical to escape submissions and top positions. This also means that matches will be more even between people of different genders, weight divisions and athletic abilities. Positions are easier to maintain and the game tends to be slower-paced than no-gi which usually results in a more cerebral match where no-gi can be more instinctual. Having more time to think during a roll means you’ll be more likely be able to look back and pinpoint how and why certain things happened so you can make adjustments. Finally, since all no-gi techniques can be used while wearing a gi (though some not as well) but gi techniques can’t be used in no-gi, the total number of possible techniques and strategies is much larger when using the gi.

In closing, both gi and no-gi have their pros and cons but totally neglecting either one could lead to some pretty big holes in the game. That is why even many of the greatest MMA world champions of all time like Georges St. Pierre and Anderson Silva trained extensively in the gi even though they would never wear it to compete. You don’t necessarily have to split it 50/50 and every instructor will have their preference but I believe it’s essential to at least mix it up every once in a while to make sure your skills are well balanced.

Come down to Arashi Do Edmonton and try out one of our great Brazilian Jiu-Jitsu programs like Fundamental BJJ, Women’s Only BJJ or Children’s BJJ for ages 4-7 and 8-14.

All those and you get a 30 DAY FREE TRIAL!